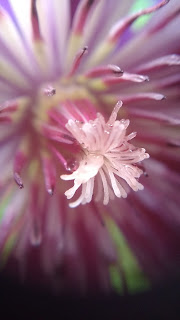 Its another beautiful day here in Welsh Wales... had a couple of dreary days after last weeks heatwave, and now today its back! Hot hot hot!!

And so enough already of the weather report! How sad I am being!!

Time is going okay, I am, as aforementioned, calling on the next week in my thinking, so its two weeks next Wednesday for me now! And as its Wednesday tomorrow, it really will be two weeks on Wednesday, the rest of this week is going to be a busy one due to the amount on the calendar, and although not wishing my life away, just my time here, it will soon be Monday and in my head I will be saying one week next Wednesday!!

I'm getting confused though and well ahead of myself, because I have only been here two weeks tomorrow!! LOL and it feels like months already!!

Closeup shot of a clematis above and a spider-like creature below, its not a spider, its a Harvestmen thingy! There are hundreds on the outside of the house in the evening!!  Its like they're gathering up! 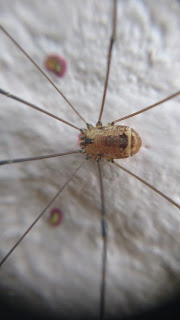 That's it!  The 2016 Olympics are over, I have never in all my life watched this much of them!  I was a captive audience! And now TV is back to cookery programs and nature documentaries, really the only things here...

My friend who comes to visit me here has been away in Italy!  She is back now, and I can't wait to see her! Web cam conversations with family and phone calls with friends, they all keep me real...

Posted by Ultreya at 3:33 pm No comments:


Back in work now almost a week.  I try to speed the week through by missing all the days between each week, round up the days so to speak! So when I arrived on Wednesday last week I said, 'Okay, four weeks next Wednesday!'  Therefore, tomorrow I will be saying, 'three weeks' next Wednesday!

Just my way of getting by, especially as this is a long five weeks stint...

But serious stuff now! You know, ladies out there reading this, there are a few things that no one told me about, now they must be things lots of people do know, just never bothered saying... like moms telling daughters!  I know when young I found there were several unknown factors that I had to come across by myself!  But as I get older, some more are becoming quite clear!

Last month I mentioned to son about an eyebrow... just the one!  My eyebrows have always treated me well!  Never having to pluck or change or move about... only a little tweezering when I was about 13 and they remembered where I didn't want the odd stray and they never came back there!  Then suddenly, and I mean suddenly!  My left eyebrow is not the same as the right!! To all intents and purposes it looks okay, but the structure of the hairs has changed, and one grew really long!!!  My son didn't look too surprised, nodded and agreed, and when I said 'this doesn't seem like news to you!'  he said it wasn't and was something that had happened to him years ago!!! LOL  Minus the tweezering of course! LOL

And, now this is the really bad news that maybe some people know, or don't!?!  Well, I know I have a good head of hair, as people always tell me, but this has definitely thinned out!  I can feel it, and it is really worrying me, which probably won't help... Reading up on this, it seems that when estrogen levels drop, testosterone levels increase, bringing the male hair pattern with it!  So check out your dad or granddads hair line!

It coincided with me upping my levels of turmeric, for bonus reasons, then found a negative of too much turmeric is hair loss!!  Also been under a bit of stress this year, so could just be a combination of things I guess, I need to relax about it and not get panicky!

I've walked into town once in the last week, and have to walk in again today... I know its not that far, but it seems it, about 20 minutes to half hour, the last bit back here is uphill all the way... The road is fast, a 60mph zone and the other day there were about half a dozen Welsh Water trucks were parked up near a hole in the ground!!  I asked if this was the Welsh water well?  A man said 'yes!' and we stealing it and taking it to England!!

I have to try to walk in at least once every few days, otherwise I just don't get fresh air or exercise, and I must, its very tiring doing nothing, and I need air!!

Today looks like another hot one, yesterday evening at ten to six, this is what the thermometer read! 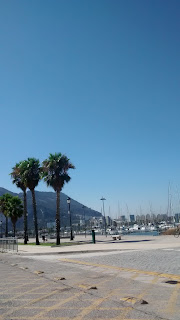 The port at Gibraltor, its been up-dated big time!  We drove down the 'old' road... took an hour and a half, not too bad, I think quicker than it used and that's with reduced speed limits... Good trip down, got a few bits and pieces from the supermarket, had lunch... not the best of choices of venue... don't know why we do it!  Hunger maybe, but we should stop and think really!  The table got fun sun and I had to move around the table, getting trapped in the process by people sitting at the too close table behind!

And all for some over cooled battered fish!! 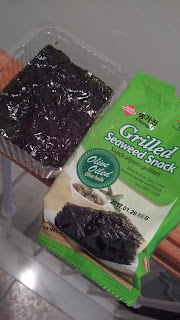 One of the items purchased in the above mentioned supermarket!  Wonderful grilled seaweed!  Yum yum yum!  Three small packets and all gone now!!

Probably too high is salt for me, but once in a while eh! 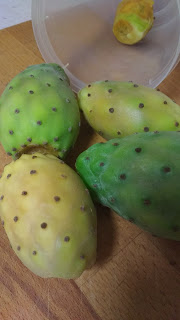 Today we picked up the prickly pears in the adjacent food market next to La Trocha flea market this morning, am I am back to work next week, I will miss the chap who sits along from our street, peels them and pops them into a plastic bag for you, one euro for about ten from him usually!  Love these things, peeled and in the refrigerator, eat chilled, very yummy! 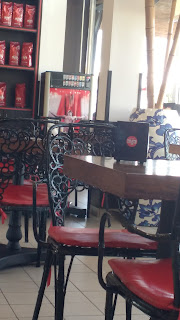 Last week we went to one of our favorite stores in Malaga!  Bauhaus.... its just a big ferreteria, [hardware]...
But they have everything, including a great little bar that looks quite quaint! 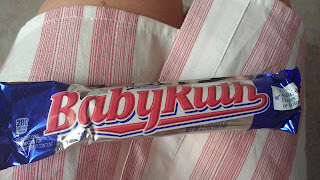 I couldn't resist the BabyRuth bar in a store last week either!!! Strange diet I am on these days, its called a 'eat what you can where you can because you'll be in work for five weeks and won't have a dam thing' diet! 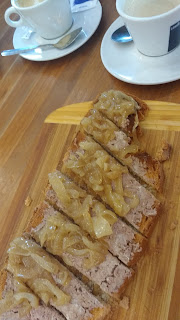 I think this was the best I ate last week, a wonderful piece of toast with the very best Iberican paté and caramelised red onion on top!  Although as I Twittered at the time, the service was very poor and we were almost at the point of leaving when 'he' noticed us...

Been a busy few weeks at home, lots going on, doctors, hospital... every town and village in the nearby province!  Catching up with friends and doing some things we needed to do which had been put off for no particular reason over the last few months...

I have been working on a couple of books, one is just about ready for the off!  Just waiting for the word from the Amazon team and I can get it 'live'...

Its been too hot to sleep, too hot to relax... too hot to stay in-doors, so we have driven to cooler places, like the coast and shopping malls with its wonderful cool air, until you come outside and remember again how hot it is, apparently the last few Julys have been hotter than the Augusts that follow... We'll see, well, Franco will, its not cooled down yet during the days, but the nights are better... We had to buy a new ceiling fan for the living room, Franco and I had fun putting that in place!  The last one we changed was when Tony was here, down-stairs in what is now the dining room... The halogen light bulbs are lasting well in that ceiling fan!  This one was already built, just a question of trying to wire it up with the use of one ladder and a dining chair in 50 degrees of heat!!

Pippa has been to the vets too, shots, nail clipping and worming tablets, she is back again in a few days, don't tell her!  She has to have her kennel cough updated, two of those before she goes in there!

I might not Blog again before work, its only two days, and I will be on a 6am flight from Malaga to Cardiff... and into work for 1pm... Speak soon amigos!  I will take some sunshine with me to Wales, although I won't mind the drop in temperature!