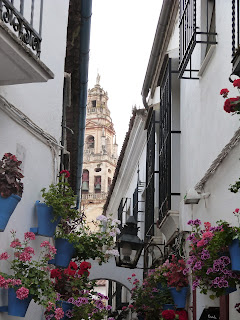 This was taken from a narrow alleyway that half the visitors were all trying to walk up and down at the same time! Leading to much confusion and photographs of unwanted persons! The confusion also I guess... that once up the allow into the pretty little plaza... no way out!! LOL 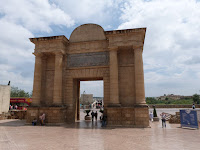 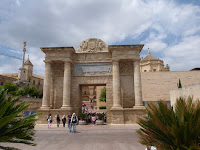 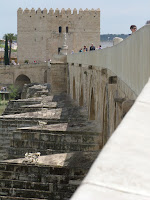 Photographs above the massive monument lead towards the river and the beautiful Roman bridge originally built in the early 1st century... It crosses over the Guadalquivir river. 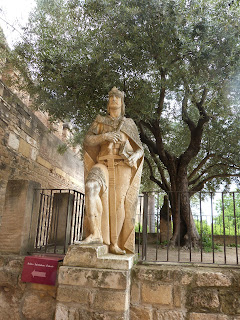 The Alcazar of the Christian Monarchs  above.. he stands guarding the entrance way... 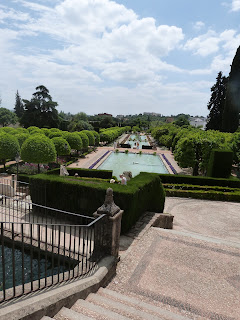 Well, this could be a long post, apologies for being so lax in my writings...

I shall begin with my trip to Cordoba! 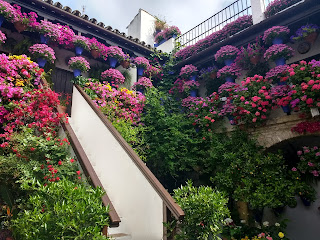 A coach party organised by a local charity shop in Coín and a friend invited me, and very grateful I am too! Having been several times to Granada and Seville I had never been to Cordoba!

This trip is every year at this time to visit the Patios Cordobas! The patios of Cordoba! 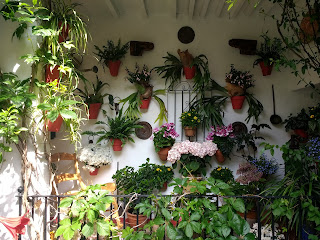 And extremely beautiful they were! My friend and I raced to the area in the city to see them and were quite lucky to be early in most of the lines to get in! 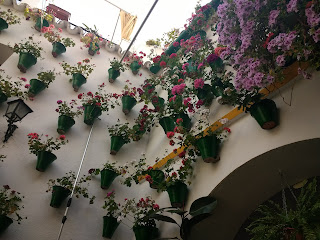 There was no charge, but you could donate, on your way out of each private house... 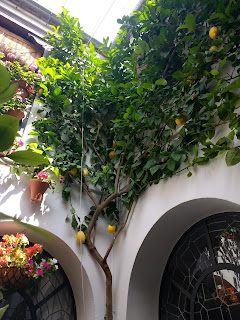 The wide angle below is inside one of the most spectacular buildings I have ever been in, which includes the Vatican, and the Coliseum!

The cathedral/mosque is truly amazing, it is one of the world's heritage sites and I would definitely go again. 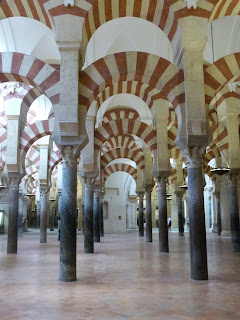 We had an amazing day, and I'll post more photos tomorrow, I promise!!

Posted by Ultreya at 3:01 pm No comments:

I guess over the past couple of years, and esoecespec this last year, I have forgotten what my own Blog name means.

I may take several steps forward with courage, but many back in fear.

If I told you I apologize, but I am teafire a book I last read back in 2001, Shirley MacLaines The Camino, A pilgrimage of courage.

As I sit here now on the terrace, had to go to the social security office this morning, as always futile, have an appointment now for later today, great I get my healthcare here, only here, not in the UK by the way. Which is fine, but I applied for this in October last year... took papers into social security office, have waited over two months, still don't have the documentation... Been without any cover now since January, I think I will have to apply in August this year! It's idiotic that in the 21st century a simple email cannot be sent and printed out.

And I don't even know yet if he'll say it's going to be another two months!

And so the journey continues. 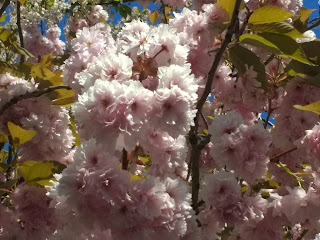 Listening to music in my ears... Left my placement, spent a drunken night with a good friend, spent a day feeling icky! Got on a coach said "Bedford" ended up in Oxford!

On the approach to the bus station amongst those dreaming spires! And passing restaurants, passed the Franco Manca restaurant! That wasn't fun at all! I knew there were a couple in London, but didn't know or expect to see one suddenly there!

Then after a short but plain speaking argument with the driver, where he admitted he didn't hear me when I asked for my destination, bit odd that he charged me what he did think I asked for!! I had to disembark and reboard, but not pay again, which was good news, it not actually being my fault!

And okay I didn't check my ticket, I wouldn't normally, I didn't even wonder at the route really, I didn't know it! So, anyway, Tony collected me from Milton Keynes eventually, an hour and half later than I should have been in Bedford!

I've now had a good day with Tony, lovely weather yesterday, and we went to the movies, saw the new Marvel movie Avengers... In 4DX! Which meant moving seats, air blowing in faces and from behind, water spraying about! But the biggest thing was definitely the seats! Moving up and down left and right, taking punches in the back and rocking every which way! Sounds rough? It was a rough ride indeed, but l loved it! Lol now I'm on the train, going the right way for the right city, it's pouring with rain and the smell of diesel is overwhelming!

At Tonys I started watching a series called Happy, which is really good, just hoping now it's available in Spain too! Oh how could I forget I also spent time on Tony's Oculus Rift! Amazing as always! So I am buying the Oculus Go! Well why not, what does it matter eh...

Time has gone and I forgot I had made these notes, so only just now putting my Blog together! It's Saturday night, and had three wonderful days with Baz and family. Walked, been to the parks, to the city centre, and a couple of walk pasts of their soon to be new home.

Today especially the weather has been really warm, still 19°c out there and gone ten at night!